The future of British popular music and its world dominance for the following 30 years was the result of Decca Records decision to release Lonnie Donegan and his Skiffle Groups recording of "Rock Island Line" in 1956.

Vince and the Vagabonds were playing "Rock Island Line" on stage within four days of hearing it for the first time. As each Donegan record was released their repertoire grew.

Vince had become such a fan of Donegan's that he booked to see Lonnie 12 times in one week when Lonnie made his variety debut at the Nottingham Empire. Due to Vince's persistence and Lonnie's friendliness, Vince was invited into Lonnie's dressing room after the Wednesday second house show and then for his skiffle group to play for Lonnie on the Saturday morning at the theatre. Upon hearing them, Lonnie was so impressed he encouraged them to turn professional.

Throughout his career Vince's greatest wish was to sing with Lonnie. He had performed duets with Eddie Cochran, Gene Vincent, Marty Wilde, Cliff Richard, Billy Fury and more but these faded into insignificance alongside that of the prospect of singing with Lonnie.

In 2001, Vince supported Lonnie at a festival. Following the show Lonnie suggested that they should do something together sometime. The following year, Harry Whitehouse, a friend of Vince's and editor of a popular Nottinghamshire newspaper, approached Lonnie's manager and brought up the subject of Vince's yearning to sing with Lonnie.

A few weeks later on October 30th 2002, Vince finally performed with Lonnie. There was serious concern prior to the show as to Lonnie's health as he had been complaining of a bad back. So much so that Vince was asked if he could perform a 30 minute set as Lonnie would only be capable of sitting down to perform a few numbers.

Prior to going onstage Lonnie asked Vince to stand by following Grand Coolee Dam, about 20 minutes into the set. Lonnie said he would introduce Vince and then take a break whilst Vince held the fort. It appeared that Vince's dream of singing with Lonnie was not to materialize after all.

Lonnie introduced Vince as the kid who came to see him backstage at the Empire during his first week in variety. "A snotty nose kid with a ukulele in his hand" announced Lonnie. Maybe a snotty nose but no uke, recalls Vince. But it made for good theatre.

As Vince walked onstage he greeted Lonnie with a "not worthy" bow and soon discovered that Lonnie intended to remain onstage and perform the duets. "Bring A Little Water Sylvie" and "Midnight Special" were the chosen numbers. Following a vote of thanks to Lonnie for being such an inspiration to so many and for establishing the foundations of British Rock & Pop, Vince shook Lonnie's hand, they hugged and Vince walked off the stage to a thunderous reception.

With his lifetime's ambition fulfilled Vince went to his dressing room, put away his guitar and then took a seat on the front row of the circle in order to watch the remainder of the show. He hadn't been required to hold the fort for half an hour and Lonnie appeared to be fully recovered from his bad back, putting in the best performance Vince had seen him do. The seat Vince occupied was only a matter of feet from where he had watched Lonnie for the first time 47 years earlier. The Royal Concert being built on the site of the old Nottingham Empire.

After 1hour 40minutes of musical magic Lonnie finished with "This Might Be The Last Time". It was, as Lonnie passed away the following Sunday November 3rd 2002 from a blood clot in his back.

Vince had been a part of the coming and of the demise of the man who sowed the seeds that became British Rock & Roll.

Vince performs with Lonnie during Lonnie's last ever performance at the Nottingham Royal Centre in 2003. 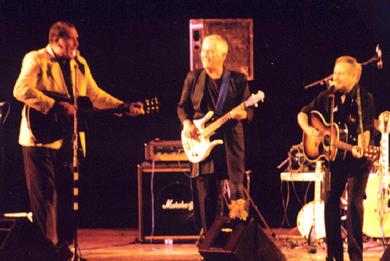