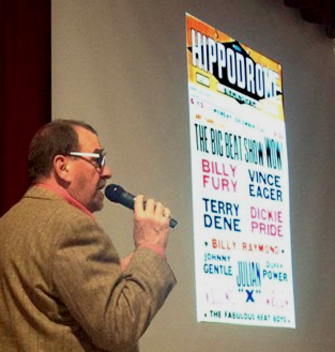 As featured on the BBC 4 TV documentary, "The Sound of Fury", Vince remembers the times he spent as a flatmate with Billy.

During his 60 years in showbiz, Vince has collected a wealth of stories, anecdotes, tales call them what you will, that he enjoys talking and writing about. His on stage popularity over the years has recently spun off into the success he's enjoyed with his book, "Vince Eager's Rock 'n' Roll Files" and his presentations. For the past four years Vince has been a regular contributor to the international glossy magazine "Vintage Rock", where he relates his tales of the early days of British pop and rock 'n' roll, and more recently he has become an in-demand speaker with his fascinating and at times, hilarious presentations.

Along with his writing, performing and radio show, Vince is becoming more and more in demand for his talks and visual media presentations. Such is the wealth of material at his fingertips that  he has three presentations.  Two are based on the early years of rock 'n' roll and pop, and the third covers his fourteen years as a Cruise Director onboard luxury American cruise liners.

If you're looking for an audio visual presentation speaker with a wealth of experience with fascinating stories and many never before seen photos of your favourites from yesteryear, then Vince is the one for you.

Vince will perform to any size audience and if preferred, without the visual presentation. He can also supply a sound system, projector and screen if required.

"One of The best speakers we've had and we've already re booked Vince for part two next year...........Radcliffe on Trent U3A

"Vince will be with us at Hemsby again this year for his second show and presentation following on from his success of last year.".........Richardson's Holidays

"Vince had the audience spellbound, and at times in fits of laughter, as he recalled his days working alongside the big stars of the 1950s & 60s"........Chesterfield Ladies Luncheon Club

"Following his one hour show, Vince held a Q&A that had the 400 plus audience glued to their seats.".........Butlin's Skegness

“A fascinating insight into the early days of Skiffle and British Rock & Roll, invoking memories of life on the road and dubious management!”.............Radcliffe on Trent Probus Group